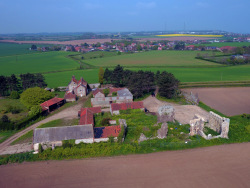 Bromholm Priory today, with part of Bacton village in the backgroundThe village of Bacton is very much part of the medieval Paston story – and of course it was a rather larger parish then than it is now, the sea having gradually nibbled away at the coastline over the centuries. Farmer Clement Paston of the late 14th century would have walked through the parish on his way to the market at Winterton; hundreds of pilgrims passed this way on their way to Bromholm Priory; and the ruins of the priory stand to indicate the size of this once prominent Norfolk monastery. The Paston family claimed their ancestors had been involved in the founding of the Priory. Henry VIII and Edward II were among those who visited.

In the planning for the Paston Footprints project, a visit to Bacton school was a highlight, with re-enactors in the classroom – with a degree of special care necessary as crossbows and other bows were used. Chances to try on a coat of chain mail and to play children's games from medieval times were on offer. 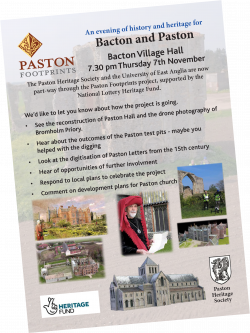 An invitation to Bacton village hallSeveral visits for inspiration and planning were made to Bromholm Priory itself, and local knowledge was enlisted. Documentation about the priory over the years was collected. A meeting at the village hall gathered further details and ideas for the coming months, though follow-up was disrupted through the Covid restrictions. The modelling of the priory continued as part of Paston Footprints and has led to the 3D presentation and further artwork. Great co-operation was received from the landowner for both visits, and for the extensive drone photography undertaken.

A morning out at Bacton/Witton WoodsThe Bacton walk, featured on the web site and on the phone app, begins and ends at Cable Gap. It takes in both Bacton Church and Bromholm Priory. The accompanying audio trail is by Agnes Paston, with words taken from her letters from the 15th century – when a walk along the sea front might have been more dangerous because of marauding pirates. Not far away are Bacton Woods – or perhaps more accurately, Witton Woods – splendid for a family walk. The woods were once owned by the Paston family, and today are administered by North Norfolk District Council.