Click the moving picture to pause and restart it. Use the controls below it to change the scroll speed and paused position. Running a mouse over some of the display items will make further information available. To see a full screen image of the document or artefact, click on it. For NRO images, all rights are reserved by the Norfolk Record Office and for further use they should be contacted, using the reference number shown.

One of the major highlights of the final year of Paston Footprints was an exhibition at the Norfolk Record Office which drew together many of the strands that had been explored and presented in the four years of work by the UEA, the Paston Heritage Society and the Record Office itself. 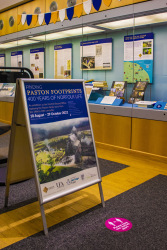 The entrance to the galleryFor August, September and October the display cases of the main gallery became the home for a great selection of original material from the Norfolk records, examples of Paston documents borrowed from other sources, including the British Library, and for explanatory panels and pictures illustrating aspects of the Paston rise to power and influence and their subsequent decline with the end of the male line.

As well as the gallery display windows, two videos were running, with members of the family – in the animated form developed for the project – shown on screens; and beautiful costumed models of John and Margaret Paston of the medieval letters were on hand to 'welcome' visitors.

The exhibition told the story of the Paston family from the Middle Ages to the Stuart period, starting with how the family rose from farm labourers to become knights owning manors across Norfolk and then how they fell from power. Visitors learnt about the serendipity involved in the discovery of the letters, examined composite manor maps marking the rise, peak and fall of the Pastons' power, and read Paston school reports, love letters, neighbourly gossip and details of shrewd business and political negotiations.

John & Margaret Paston with creator Penny KneeThe Pastons at War panel was complemented with a reproduction crossbow. The Paston women's voices were showcased using quotes from their letters and the display featured a Rosies' Plaque to Elizabeth Paston, made by the History Hunters at the Millennium Library Heritage Collection. The narrative about the Pastons' interest in alchemy was aided by a digital reconstruction of the Paston lab. Portraits of Paston children, the Paston pedigree and heraldry records provided a visual feast. Understanding the Paston family bubble in an Age of Plague was an all too timely connection with our lives today: striking comparisons were noted in a tutor's report on educating Paston children with current home-schooling experiences.

The nature of archives was also addressed. Questions were explored about how far we can trust what we read (the challenges facing translators and editors across the ages), the privacy strategies used by the Paston authors (from seals to cyphers), and hidden meanings, not least because of the Norfolk dialect!

The exhibition highlighted the new research discoveries that were made during the project, as well as project outputs and the Paston letters and archives that are held in the NRO. The exhibition was jointly written by Karen Smyth (UEA) and Jenny Watts (NRO), with assistance from the PHS. Over twenty organisations or individuals lent or reproduced items.

As well as the traditional displays, a highlight was the recreation of John and Margaret Paston's clothes, by Penny Knee. We recorded a video of Penny sharing the fascinating processes involved in the three-month labour of love recreating historical costumes here.

We also used our digital storytelling outputs. Alongside the more traditional displays were video showings of the 3D digital Paston home reconstructions alongside the animated Paston characters. For an immersive experience, visitors could also scan QR codes linked to letter readings, music and early dance moves.

There were 13 talks that accompanied the exhibition, offered in a Wednesday lunchtime seminar series. Those recorded can be seen on the NRO's Youtube channel.

Two workshops were also held, one hosted by Dr Holly Maples on 'Weaving your own Story' and one by Dr Karen Smyth on 'Data visualisation and Archives'. School workshops took place on Tudor shopping and heraldry.

There were two archive training courses, devised by the NRO, UEA and Darren Leader Studios. One was on palaeography (Tudor to Hanoverian handwriting) and the other on title deeds, featuring Paston and other Norfolk archives.

The exhibition is going 'on tour' in 2022, in various locations across Norfolk. A permanent selection is being installed at Oxnead Hall.

Watch this space for the digitally immersive experience!

Our scrolling panorama of the gallery cases – at the top of this page – is being developed so that we can provide links to images of the objects and links to pages within the 'This is Paston' website for those who would like to explore further. Links from the panorama are not available within this first iteration, but we intend to add them before too long.