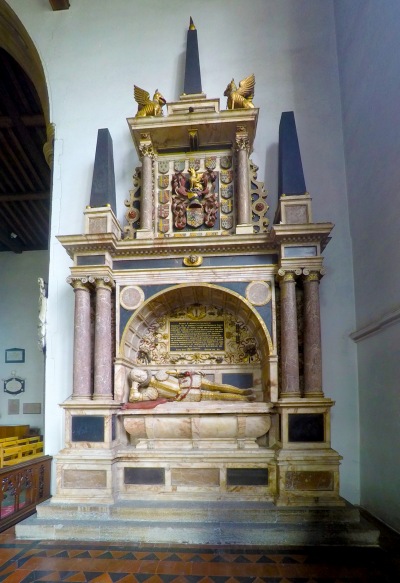 Commissioned before his death

During his latter years Sir William commissioned a fine tomb for himself in the sanctuary of the church. Sir William was an extremely wealthy man, and the cost of the tomb was £200 (perhaps £25,000 in a 21st century valuation). The work was undertaken by the London mason John Key.

Sir William may have feared that he might be the last of his line, and that a major Paston family memorial was needed. He may also have been thinking of the pupils from the school in North Walsham that he had founded in 1604 and endowed in 1606 – they would be able to pay their daily respects, once he had passed away. In the 20th century, this had become an annual ceremony rather than a daily one, but the boys of the school continued to process round by the tomb on Founder’s Day into the 1960s.

Sir William lived long enough to see his tomb completed in 1608, and he died in 1610. He was placed in the tomb the day after his death. A translation of the inscription reads,"Sacred to Piety and Beneficence. Here rests the Lord William Paston, an illustrious Knight sprung from an ancient and noble stock, most noble in his descent and family connections, famed for a hospitality of fifty-five years standing, which is to continue twenty years after his death, munificent in repairing the cathedral churches of Bath and Norwich, and Gonville and Caius College; a benefactor to the poor of the town of Yarmouth, who has piously founded by perpetual endowment a school in this place for the instruction of youth and the propagation of the Word of God: and he, mindful of his mortality, has set up in his lifetime, in the year of the Lord, 1608, this monument, in the sure hope of rising again in Christ."

An entry in the Parish Records indicates that on the day following the funeral of Sir William, his wife's remains were transferred from Paston Church and placed with his, though there is no record of Frances on the monument.

A suggestion by Charles Forder, the Paston School historian and former pupil, is that the words were composed by the first Master of the school, the Rev Michael Tilles. Our model of the lower part of the monument shows "the picture of a man in Armor restinge upon his Arme of five foote and a half longe in Allabaster", as instructed in the detailed contract for its erection.

In 2006 the Rev Roger Dixon, a native of Knapton and a former pupil of the Paston School, took the service to celebrate the 400 years since the endowment of the school. In his address, he looked round to Sir William’s tomb and reflected on the changes that this Sir William must have seen in his lifetime. Doubtless in his youth St Nicholas’s was decorated with many wall paintings and traditional Catholic emblems; by the time the Reformation had run its course and Sir William was laid to rest, such ‘popery’ had gone and whitewash had been applied to the walls – but fortunately the tomb itself survived both that turbulence and the changes wrought during the Commonwealth years. 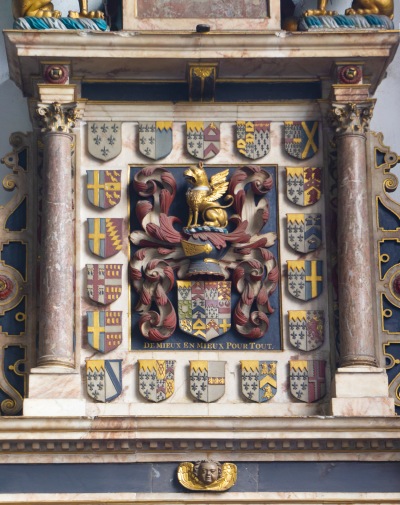 The several coats of arms at the top of the William Paston monument.

Above the arch which contains the effigy of Sir William is a panel of heraldic importance. The eighteen shields that border this central panel of the tomb are of great significance. The first five shields across the top of the panel record an ancestral pedigree for the Paston family – the family were determined to establish their right to be recognised as important members of society. The next nine shields celebrate the family marriages from the end of the 14th century to the beginning of the 17th century. They include the famous Norfolk names of Mautby, Brewes, Heydon, Wyndham, Clere and Knevet. The final four shields are a further embellishment of pedigree, largely celebrating the key union between the Paston and Mautby families.

Our next page gives an opportunity to further examine the shields on the tomb.