Our friends at Mautby have helped greatly in the Footprints project, with a number of outcomes. 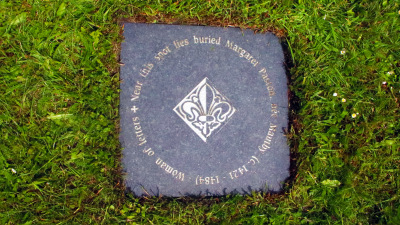 Margaret Mautby is a key figure in the Paston story – as a letter writer, a remarkable force while her husband John Paston was in London, a contributor to Paston fortunes through her own inheritance, and mother to at least seven children. Our outline biographies for the medieval Pastons will tell you more of her story and our information page on Mautby and Margaret Paston gives more detailed information.

The Paston Letters contain many written by her and one of her clerks, but before these we find letters written by John's mother Agnes as the courtship of Margaret and John begins.

Paston expert Norman Davis suggests that Sir John Fastolf may have had a part in the arrangement of the marriage of Margaret to his own legal adviser, who was of course John Paston I. Margaret's father had died previously. 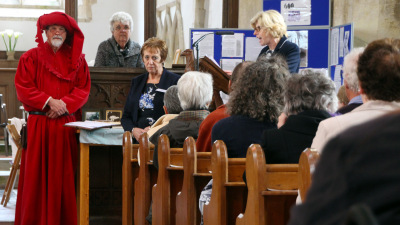 Early on in the project our John Paston I spoke at the church.Representatives of Mautby today have been active throughout Footprints, and they have been leaders in preparation of the displays now at the church, the Paston Footprints trail and the memorial stone.

One of the key outcomes of Footprints has been the placing of a memorial stone on the south side of the church. We can't be sure of the precise location of her grave; originally it was within the church in the south aisle, but that was demolished, probably at the time of the Reformation.

Where exactly is Margaret's grave? Did she have a splendid tomb which was unceremoniously destroyed? Archaeology may provide the answer, and we hope later in 2021 to undertake a magnetometry survey to see what lies below the surface. 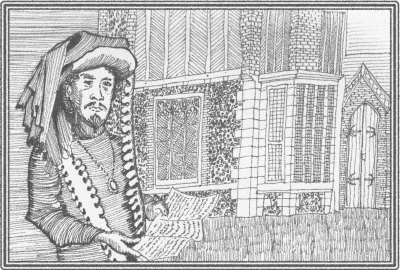 We can only imagine what John Paston I might have looked likeThere are no extant pictures of Margaret Paston, so we can only suggest her appearance. To help tell the story for the younger age group - though not of course limited to any age range - you can hear from Margaret in one of our animations.

Likewise our animated Sir John Fastolf will tell you his story, about his adventurous life with Henry V's army and how he came to build Caister Castle. His leaving the Castle to John Paston I in an unwitnessed will led to both problems and prosperity for the descendants of the Paston family.

Forenames were often reused in the generations of the Paston family. We have ten William Pastons in the centuries covered in the Footprints project. Even more confusing, the first John Paston – John Paston I – had two sons called John among his children. This may have come about through the naming of children after their godparents. 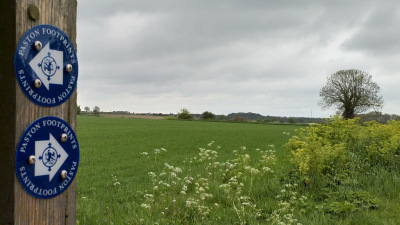 You'll find Paston Footprints markers on the trailsFor each of the Footprints hubs, we've established a trail and activities – the former for adventurous walkers, the latter for families to explore more locally. With the help of Norfolk County Council, these are now well-marked trails; look for the blue markers with the griffin logo. You'll also find a printed map, or you can follow a map available online.

If you can't get out and about yourself, you can also follow the walks and listen to the podcasts on-screen from this web site or from the Paston Footprints web site - there's also a cycle route. Later in 2021 you'll be able to access a Phone App to act as a guide as you walk and supply a podcast for various locations. There's a web-based version of the Phone App, and in due course there will be a version available from the Google App store and the iPhone App store.

Caister Castle - The Siege in the Letters 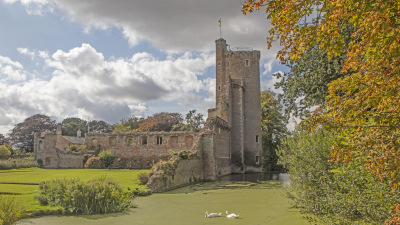 Throughout the decades covered by the Paston Letters, some of the most dramatic deal with the siege of Caister Castle in 1469. Margaret and her two sons correspond; John III is leading the defence on site with a small retinue of Paston followers, while John II is in London, seeking support and legal redress – though his mother thinks he should be much more active! John II does endeavour to reassure his brother of the quality of the professional soldiers he has sent to help.

When looking at the letters, you'll find there's often a menu that will enable you to view the letter as it might have been written today – medieval language can be tricky to follow! You'll also find at the bottom of the letter page an option which will allow you to see the original letter as it is today, in the British Library. "Recto" is the "right" or "front" side of a page and verso is the "left" or "reverse" side.

You'll find several more letter links from the Caister Castle page linked above. And of course our animated John Paston III is very happy to tell you the story in his own words and pictures.

The church of Saint Peter and Saint Paul at Mautby is the start and finishing point for our walk. Going into the church we can imagine Margaret Mautby and John Paston I taking their vows in front of the congregation there, and several decades later Margaret being brought back to be laid to rest in the south aisle, which was then attached to the church.