The castle at Caister, near Yarmouth, was for a time at the heart of the medieval Paston story.

The Fastolf family were an influential and important family in the Yarmouth area in the 14th century. Evidence suggests they owned a fleet of 8-10 trading vessels operating out of the town. In 1362 they acquired the manors of Caister Hall and West Caister; John Fastolf was born in the moated manor house that stood in Caister. 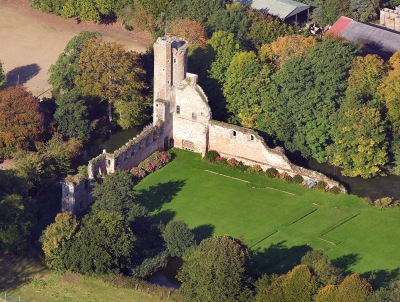 Caister castle in 2008 from Mike Page's selection of aerial photographs.John Fastolf went off to war as a soldier in France, becoming a knight and demonstrating his prowess in a number of battles in the later part of the Hundred Year War and in the time of the warrior king Henry V. He was probably not actually at the battle of Agincourt, being ill in England at the time, but he participated in many of the famous battles of the era. As a result of his reputation and of his obtaining ownership of a number of properties in what we now call France, he came back to his house at Southwark a rich man and on his retirement back in Norfolk embarked on the building of a fine new castle at Caister - building unusually in brick.

Having been at one point the captain of the Bastille in Paris and of various other castles in France, he doubtless returned with many ideas of what he wanted in a grand defended manor house. By 1440 the castle was complete at a cost estimated to be £6,000. While he evidently want to make a grand statement with its design, it was also intended to be defensible, with gun ports, arrow slits and a wall walk with castellations. Water from the River Bure was channeled to form the moat, and a drawbridge at the gatehouse could be raised if necessary. The rooms in the castle were fitted out with high quality furnishings and furniture; an inventory of Sir John's will gives us the details. A barge yard and a channel, the Pickerill Holme, enabled goods to be brought from the river and thus provided a link to the sea. 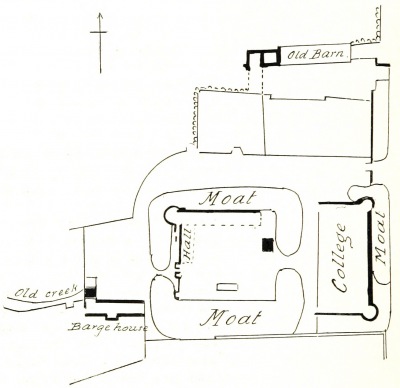 Mackenzie, J.D. The Castles of England: their story and structure,1897, showing sdtructures then standing.A few days before his death in 1459, Sir John made a verbal will, giving all his properties and possessions to his lawyer, John Paston I. But envious eyes, particularly those of the Duke of Norfolk, fell on John Paston and the legitimacy of such a verbal will. It would take ten years and the death of the Duke of Norfolk before the matter was settled. During that time, in 1469, the Duke seized the castle by force, employing four knights and many men. Records say 3,000 men made up the attacking army, probably a considerable exaggeration to increase the reputation of the two or three dozen, led by John Paston III, who held out against the attack for nearly two months. Clearly William Gravour or Gravere, the clerk of works for the building of the castle, had known his job in designing a defensible building.

The one thing that John Fastolf has specified should be done at the castle was the building of a chapel and the employment of a team of monks who would pray for his soul. With the wrangling over his will, this never happened. He was buried a few miles away at the abbey of St Benet at Holm(e). In the final settlement of the ownership dispute, under the influence of Bishop William Wainfleet, his spiritual memory was consigned to Magdalen College, Oxford.

Once the ownership of the castle had been secured in 1476, the Paston family were able to consolidate their hold on the rich farmlands of the Island of Flegg and to exploit the castle's strategic position to gain influence in nearby Great Yarmouth. The Paston family owned the property until they fell on hard times.In 1659 it was sold to a local trader and then came into the possession of the Bedingfeld family. An illustration of 1776 shows that the majority of the buildings were still complete, but as with many historic buildings, stonework was often robbed for other constructions.

Story of the motor car 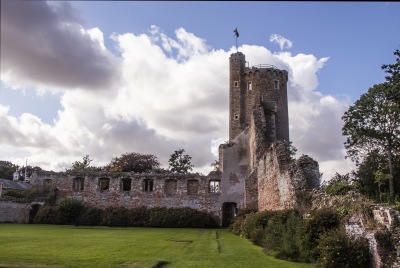 A photo from the area marked as the 'College' on the map above; the splendid 100 foot tower is still open to be climbed today.After a further spell in other ownership, it became the property of Dr Hill of Leicestershire. He recognised both the historic importance of the site and the opportunity to develop a museum of his other great interest, the story of the motor car. Thus today the visitor can appreciate and enjoy both the scope and size of a remarkable and ground-breaking building of medieval times and see a huge range of motor vehicles of all sizes and types which the Hill family have collected and continue to care for at the West Caister site.