Cromer and the Paston family

Once William Paston I had become a successful lawyer, his income enabled him to set about buying land. Among his purchases was part of today's Cromer. We know from the Paston letters and other documentation that there were a number of disputes about land which the Pastons claimed, but the ownership of Cromer seems to have been straightforward. 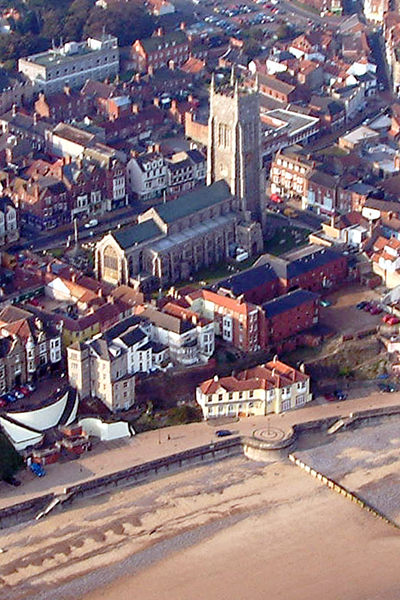 By July 1426 William Paston I had purchased the Cromer estates of Shipden and Ropers; we know this because in that year he obtained confirmation of the charter of Edward I, granting Cromer its annual fair and Friday market. He had probably purchased the Cromer properties in 1422. The medieval manors of Cromer are complicated, but Shipden and Ropers were essentially the central area of the town today and that substantial part now lost to the sea.

Cromer given to Agnes

Historian Walter Rye says of one of the local manors: “After this it came to the Pastons: Sir William Paston, the judge, by his will dated in the 22nd of Henry VI [1444] gives it [Cromer] to Agnes his wife for life, and recites that it belonged to his father Clement Paston. In 1611, William Paston was lord of this manor, called Weylands in Cromer … and it was said that a great part of the lands belonging to it were being swallowed up by the sea. In Sir William’s time the rent of assise was 64s 11d per ann.”

Tallest church tower in the county

Cromer pier is mentioned in this Letter Patent of 1390, National Archives.

In Rye's consideration of other documentation, he puts the building of what is today's parish church in Cromer as taking pace in the 14th century. Today when we look at the church we see in the main a Victorian restoration, but the size and shape demonstrate that a considerable investment went into the building of the church, with the tallest church tower in the county of Norfolk. Rye also reasons from shipping records that a small port lay to the north of what is the town today, supplying many ships to the king's navies. With Judge William Paston obtaining ownership of the town early in the 15th century, he acquired a newly completed church and a maritime centre of importance. A Cromer pier - a working pier, not a pleasure pier - is mentioned in a Letter Patent of 1390.

Agnes Paston’s will of 1466 says: “And after that on the … day of the month, my said husband, lying ill in bed, sent for me, John Paston, Bacton and John of … he assigned to me the manors of Paston, Latimer and Shipden and Ropers in Cromer.” Thus Agnes became landlord of a substantial and busy settlement.

It is the detail of the Paston Letters which makes them of great value to historians; they deal with the functioning of medieval estates against the general background of history. For Cromer, Agnes has an efficient tenant in William Reynolds, who also acts as her bailiff; he reports on his success in gathering in her rents and also on renting out a rather dilapidated property. John Rycheman's place. Thus we come to meet another inhabitant of the town and learn that Joan Icklingham, who lived next door - Joan herself having a somewhat dubious reputation for her behaviours when her husband was away - didn't much like the person who had moved in.

Agnes often asked her sons and grandsons to collect rent. “I send you word how John James was demenyd at Cromere, so send to James Gresham, how he shall be demenyd. Gaffry Benchard, Alexander Glover, tokyn a distress of John Jamys of the bond tenant of A. Paston, called Reynalds in Cromer … and W.Goodwin, bailiff of Cromer, with the seyd J.James, with force took away the dystess which was a horse and plowe.” Thus the names of tenants and traders in Cromer, their successes and their woes, emerge

Sir John Paston III to Agnes “Also mother, I pray that my brother Edmund may ride to Marlingford, Oxnead, Paston, Cromer and Caister, and all these manors to enter [to claim] in my name … and to take no money of them but to command them to pay servants of mine uncle on pain of payment again to me.”

The several Paston Letters dealing with the disputed ownership of East Beckham also give us glimpses of Cromer. It is the vicar of Cromer who has to witness various statements which will be forwarded as part of the arguments in court. In particular we learn of fisherman William Mariot of Cromer who bought East Beckham in or about 1414. Colin Richmond's research beyond the Paston Letters research leads him to the opinion that the straightforward description of William Mariot as 'fisherman' must be an understatement; his ability to borrow 450 marks surely made him a boat-owner and substantial businessman in Cromer. His drowning on 5th September 1434 'by tempest of the sea' leads to his widow Joan Mariot finding her place in the Paston Letters as she seeks to deal with the debt of 300 marks still left owning on the property.

Centuries later Dr Owen Hughes gives an outsider’s view of the inhabitants and town of Cromer. “At a court kept at Cromer for the admiralty I met with great civility for your lordship's sake from the most rough sort of people, the sea-men and the mariners.” The court had met to agree who owned the cargo of a ship stranded at Cromer. Sir John Hobart declared the court was illegal as the ship was his and he threatened the jury. The jury were not impressed and brought in the contrary verdict.