Discussions in 2018 between the Directors of the Footprints Project and representatives of the Great Yarmouth Local History and Archaeological Society (GYLHAS) concluded that the best way to raise the profile of the Pastons in Yarmouth was through an exhibition at Great Yarmouth Minster and a conference (an idea which subsequently developed into a Symposium).

The Paston Exhibition was planned so as to provide a prelude to the Symposium that followed in October. The Minster was the chosen venue as it not only provided a good space for the purpose but also contained a number of links to the Paston family. The Paston Coat of Arms, amongst the Arms of other important local families, are displayed prominently at the western end of the building. There is also a Fastolf tomb nearby. 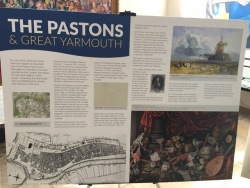 The exhibition's introductory boardThe Exhibition comprised of seven boards. Included was an information to introduce the Pastons as ‘One family and a thousand stories’, a board which described ‘The Lost Houses of the Pastons’, as well as profiles of the main 17th century characters Sir William and his son Sir Robert Paston. A board explained the overall aims of the Footprints Project including the digitisation of the Paston Letters. 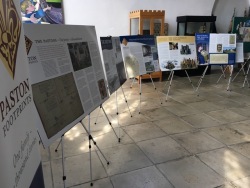 On display at the MinsterThe last board in the series ‘The Pastons in Great Yarmouth’ was especially prepared to highlight some of the important Paston links with Great Yarmouth; from the rise of the Paston family in 15th century on the Isle of Flegg and at Caister Castle, to the activities in the 17th century of Sir Robert Paston, the first Earl of Yarmouth. This research, by Dr Rob Knee, continued throughout 2018 and provided a substantial body of evidence, highlighted at the Symposium, to show how Great Yarmouth played a critical role in the rise of the Paston Family, from their extensive acquisitions of land in the area dominated by Caister Castle to the north of the town, to the role of Sir John Paston III (1444-1504) as Deputy Lord High Admiral and Member of Parliament. Further research revealed the important role played in the development of Great Yarmouth by the Pastons in the Tudor period.

The aim of the Symposium that followed in October was to continue the theme of exploring, developing and highlighting some of the themes introduced at the exhibition. Presentations at this event included a focus on both Oxnead Hall and Caister Castle as well as an introduction to the Paston Letters. 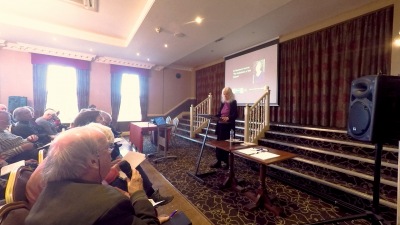 Dr Horrox speaking at the Yarmouth SymposiumA full day and a full house at the Imperial Hotel, Great Yarmouth, was hosted by Dr Paul Davis of GYLHAS. After an introduction by the High Steward of Great Yarmouth, Henry Cator, the opening talk was by Dr Rosemary Horrox of Fitzwilliam College, Cambridge, who put the Paston letters in the wider context of medieval history and explains how useful they are in understanding life in those times.

Dr Horrox was followed by Professor Tom Williamson of the University of East Anglia who drew on his wide knowledge gained through leading landscape studies and recent research on the Reptons – Humphrey and son John Adey – to consider the gardens at the Pastons' Oxnead Hall.

To begin the afternoon James Wright FSA of Nottingham University took the topic "From Caister to Cambridge: Great Houses in the Reign of Henry VI" to consider Fastolf and Pastons' Caister castle in the context of other great 15th century buildings.

The final speaker was Dr Rob Knee of the Paston Heritage Society. He used the title "The Pastons and Great Yarmouth - Controlling the Hinterland" to take attendees through the rise and fall of the Paston family,

The Exhibition and Symposium have contributed substantially to the raising of the profile of the Paston family in Great Yarmouth, creating a foundation to be developed as a heritage resource by future initiatives. Some of the the fruits of this research can be seen on this web site and the key presentations at the Symposium can be accessed.