The Pastons & the English Civil War 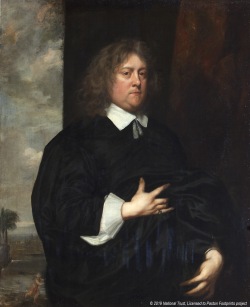 The Picture of Sir William Paston (1610-1663) which hangs at Felbrigg Hall © National TrustThe English Civil War was fought in a series of actions involving Royalists and Parliamentarians between 1642 and 1651. It was the culmination of a long struggle between supporters of the power of the monarchy under Charles 1 (The Royalists) and those backing the power of the people in Parliament. The conflict cost over 200,000 lives. Under the leadership of Oliver Cromwell, Parliament eventually triumphed. Cromwell had been responsible for the development of a New Model Army which proved to be the decisive force at the key Battle of Naseby in 1645. King Charles was beheaded in 1649. However, the Monarchy (in the shape of Charles II) was restored in 1660.

During the years leading up to the onset of the major hostilities, Sir William Paston (1610-63) – the father of the 1st Earl of Yarmouth – attempted to serve both the local Norfolk Committees (which were dominated by Parliamentarians) and his Royalist conscience.

This impossible position eventually became hopeless, and in 1643 Sir William was forced to seek refuge in Rotterdam. Some commentators believe that the portrait of Sir William that hangs in Felbrigg Hall is perhaps an allusion to his plight. The clothing and jewellery in the painting reflect Dutch fashions, and the crocodile lurking in a corner might represent the advances of his enemies.

Sir John Potts, of Mannington Hall and a distant relative of the Pastons, negotiated with Sir William’s second wife Margaret (Hewitt) over the amount of compensation that needed to be paid to Parliament (£1100 worth of plate). Sir William’s return from several months in exile followed a letter of contrition to Potts, who was the powerful figure for Parliament in Norfolk. Oliver Cromwell, a frequent visitor to Norfolk, was believed to have dined with Potts on a number of occasions. Another strongly Parliamentarian family were the Hobarts of Blickling Hall, near neighbours of the Pastons at Oxnead. 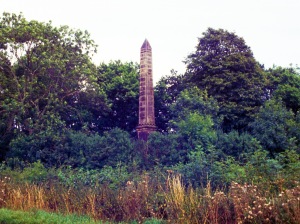 The battle monument at Naseby. Today the A14 road runs through the battle site.The family of Sir William’s first wife, Katherine Bertie, who had died in childbirth in 1637, had very strong Royalist connections. Lady Katherine’s father, Earl Lindsay, was killed at Edge Hill. Two of Katherine’s brothers were also killed in the hostilities, one at Newbury and one in Ireland. Katherine’s eldest brother, Montague Bertie, the second Earl, was a leading figure in the King’s army. Montague served as Lieutenant General and was wounded at Naseby.

Touching letters to his wife

Edward Paston’s grandson Thomas, the son of Thomas Paston of Barningham Hall and a captain in the Royalist army, was killed in 1644 at the Siege of York. This branch of the family suffered another blow when Thomas’s elder brother Clement had his property, Thorpe Hall in Norwich, sequestered by Parliament at this time.

Roger L’Estrange was the youngest son of Sir Hamon L’Estrange. Roger had fought alongside his father during the successful Parliamentary Siege of King’s Lynn in 1643. After the defeat, Roger, who was both impulsive and idealistic, headed off to Oxford see the King and convinced Charles that Norfolk was still full of Royalist supporters. Charles was persuaded and granted Roger a Commission to retake Lynn along with several ‘encouragements’ of finance and armed support.Roger headed straight to Appleton Hall – the lonely house near King’s Lynn of fellow Royalist William Paston – who was absent (possibly imprisoned). Welcomed by Mrs Paston, Roger then sent for a sea Captain, a man named Leaman, whom he had known of in the town. Roger offered Leaman £1000 to help organise resistance in the town.

Leaman agreed, but on returning to Lynn Leaman reported the affair to the Governor, Colonel Walton. Walton told him to return to Appleton, taking with him a Corporal Hagar, disguised as poor seaman. Hagar asked to see the great Commission which Roger produced from a cavity in his bed. Meanwhile, a Lieutenant with a small force of men, also disguised as beggars, arrived in the courtyard. Mrs Paston went to tell Roger about the arrival of the beggars. Roger sent them down a shilling to get them to go away. However, the ‘beggars’ then proceeded to rush up the stairs and arrested Roger.

Roger was sent to be tried as a spy but was rescued by his father’s interventions and a substantial payment. 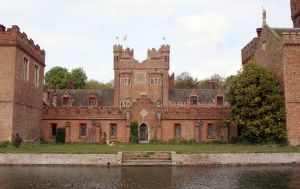 Sir Henry Bedingfeld had to exchange his Oxburgh tower for the less comfortable Tower of London for a while.Thomas Knyvett, first cousin to Sir William, was captured at Lowestoft by Oliver Cromwell. He was also on his way to Rotterdam. Knyvett wrote a number of touching letters to his wife from prison. The letters were published by the Norfolk Record Society. Another cousin, Sir Henry Bedingfeld of Oxburgh, was captured by Parliamentary forces and imprisoned in the Tower.

Sir William Paston, who was principally known for his books, artistic collections and cultural activities, had enjoyed more lenient treatment, although the upheavals had greatly weakened the Paston fortunes.

Norfolk itself escaped the bitter and bloody struggles of the Civil War largely unscathed. R W Ketton-Cremer of Felbrigg Hall charted the whole period comprehensively in his book Norfolk in the Civil War. Much of the detail recorded above is drawn from this book.