In the aftermath of the Black Death, Clement Paston had done well, along with many of the surviving skilled and local village leaders in North Norfolk. Well enough, in time, to attract the jealousy and criticism of some of his neighbours.

Clement’s skills were in great demand. He kept a plough and owned and operated a water mill at Gimingham. When, in 1380 and 1381, the Crown sought to greatly increase the Poll Tax on local communities, Clement was one of the leaders of the ensuing Peasants' Revolt that took place in 1381. In North Walsham, Clement was charged with damaging official records and with affray. However, by the end of his life Clement had built up a good holding of land, married well and was buried with his wife Beatrice (Somerton) inside Paston Church. He ensured that his son William would receive a good education.

William became a High Court Judge and used his position to buy up a large number of Norfolk manors (Estates). He purchased a number of manors from the neighbouring great Priory at Bromholm, subsequently establishing himself in the village of Paston and laying the foundations for the family’s future social progress.

William did his best to ensure that his son John had married well – to the heiress Margaret Mautby. However, when William died in 1444, John and Margaret found themselves in a very dangerous position. They were young and surrounded by many of William’s old enemies who now saw their chance. 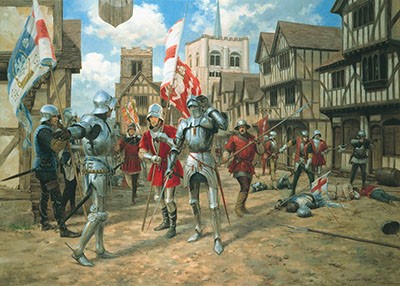 Conflict in the streets of St Albans, © 2020 graham@studio88.co.ukThe war with France was going badly, disaffected and unemployed soldiers were drifting back to England. Over the years, the monarchy had suffered a series of great shocks - Richard II had been deposed and killed, Henry V had died before his great victories in France could be consolidated. Henry’s son was weak monarch and in poor health. Powerful and competing magnates were able to operate beneath the law and often land was seized by force. In East Anglia, three powerful men held sway and, in the years to come, each became identified with either the Houses of York or Lancaster. During the second half of the 15th century, the fortunes of these men determined the fate of the Paston family.

In 1448, the newly married John and Margaret Paston were living in Gresham Castle in north Norfolk. John Heydon, a local man and an ally of Lord Moleyns and the Duke of Suffolk, first terrorized the local community, he then attacked and seized Gresham Castle. John Paston, a lawyer like his father, was already in London fighting to retain ownership of his inheritance. It was left to Margaret to defend the castle as best she could. The Pastons’ closest ally and family friend, the Earl of Oxford, was not in a position at that time to challenge the all powerful Duke of Suffolk. However, fortunes changed and with the brutal murder of Suffolk in 1450, graphically described in the Paston Letters. The family were able to recover Gresham. Also described in the Paston Letters was the Kentish rebellion of the time led by Jack Cade in 1450.

In the 1450’s John Paston was employed by Sir John Fastolf and in 1459, John inherited Fastolf’s great castle at Caister, his enormous wealth and all of his numerous estates. In the years following the demise of Henry VI and after the first major battle at St Albans in 1455, John Paston became an awkward problem for both the Dukes of Norfolk and Suffolk, they both coveted his Fastolf inheritance. At the time John Paston refused his friends’ pleas for him to secure his position and to take sides and in 1461, in the aftermath of the decisive Yorkist victory at Towton (and success in battle for both Norfolk and Suffolk), the Pastons were facing great peril.