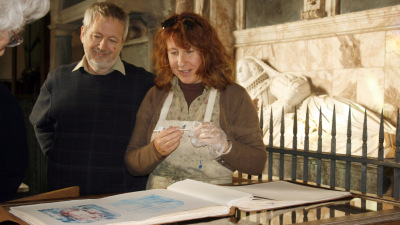 The story of the Paston Footprints project starts in the village itself, with the founder of the Paston Heritage Society, Lucy Care, and a group of enthusiasts taking up the challenge to bring the story to life.

The Paston Heritage Society was founded in 1993 after the successful Paston Festival of that year. At the festival the village staged a community play, The Inheritance, by Nick McIvor, commissioned for the occasion and involving a cast of 20 adults and almost 100 children from local schools. There were also re-enactors encouraging people to try archery, traditional games and food, and a special festival service in the church. Since then the Heritage Society has worked persistently and quietly to preserve the heritage of the village and the area.

Poetry, creative writing and artwork reached a peak with the production of the Handmade Book featured in the photograph (with poet Tim Lenton and artist Annette Rolston) and presented at a re-enactment day at Paston. A group of poets called Chronicle, linked to the society, also put on performances – one at Oxnead Hall – and published smaller books.

As the society developed its ambitions and linked up with the University of East Anglia, a first phase project was undertaken from 2016, and then the full Paston Footprints began in 2018 with a target of three years, extended for a further ten months because of the covid outbreak. 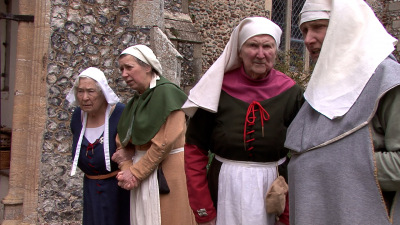 Consternation as the Paston's new wall is discussed!Before and in the Footprints project, members of the Paston Heritage Society and other re-enactors have enjoyed taking part in events at the church.

One such occasion was the telling of the story, recorded in the Paston Letters, of the moving of the road from the south side of the church to the north side - presumably with the newly established gentry of Paston Hall not having to mix with the hoi polloi of the village as they walked to church.

With one group of the Heritage Society playing the Paston family and another group playing the disgruntled villagers, tempers were frayed for a while, but peace was restored after videoing. You can still see the evidence of this early example of 'road rage' in that the lychgate is on the south side of the church, and the north side road has a very awkward bend as it passes the churchyard!

Liaison with the Church 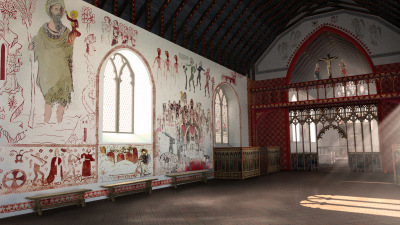 A reconstruction of 15th century St Margaret'sThroughout the two stages of the Footprints project we've worked with St Margaret's church and look forward to their completing development of the facilities there.

Members of the Footprints Project Team have supported the local committee meetings that have been considering plans to provide both community and heritage facilities alongside continued worship in the church. This will also involve providing facilities for visitors and removing several rows of pews to provide a performance and exhibition space.

The Paston tombs inside the church were studied as part of the Paston Treasure Exhibition of 2018, staged jointly by the Norwich Castle Museum and the University of Yale). The two magnificent Nicholas Stone carved memorials to Edmund (1585-1632) and his wife Katherine Paston (1578-1629) were well known. In addition, there is a floor memorial to Erasmus Paston (1508-1540). However, there are two table tombs that have yet to be identified and may belong to John Paston I (1421-1466) and Sir William Paston (1479-1554), who are both thought to have been buried here.

Digging in the Village 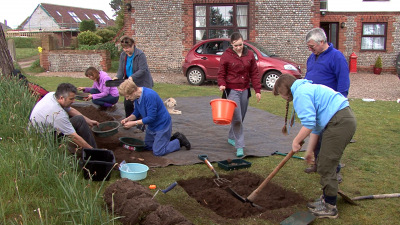 A number of groups enthusiastically dug up their front lawnsOne of the projects undertaken by the Paston Heritage Society and Corenza Lewis and her team from the University of Cambridge was the digging of archaeological test pits in the village.

The University of Cambridge team has been undertaking such digs, usually with a couple of dozen pits for each parish, in several locations across East Anglia. Each pit would be one metre by one metre, and up to a metre deep – though in practice reaching that depth was probably more than a day’s work. Any find of interest was recorded for later analysis.

Subsequent analysis of the finds at the Paston test pits produced the startling conclusion that the Black Death period of the mid-14th century probably removed up to 75% of the local population. This is higher than many areas – probably because the area was densely populated in the 14th century and served by a number of ports. 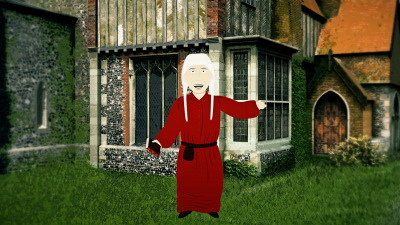 An introdcution from Judge William PastonThe Footprints project is using animated characters to bring the family to life for education in the school and at home. You might like to meet Judge William Paston, who will introduce himself. He also puts in an appearance on the Bacton Hub page, at he takes us to visit the Priory at Bromholm.

Judge William was the man, with wife Agnes, who put the family on the road to fortune by making the most of his father's insistence that he train as a lawyer, and he set his eldest son John off on the same route.

By the time of his death in 1444, the Footprints Project has established that the Pastons owned much of Paston, Bacton and Edingthorpe. In addition, they owned the land and the mill at Bacton Wood and had interests in land at Knapton. By the time of Sir Robert Paston (1631-1683) it would have been possible to have walked from Paston to Oxnead, near Aylsham, on Paston-owned land.

A later William (1528-1610) was responsible for the building of Paston Hall, reconstructed and brought to life in 3D by the Footprints Project Team. Sir William also built the Great Barn and provided a pair of almshouses in the village. Sir William is thought to have transferred the Paston Family seat to Oxnead Hall in 1598. Subsequent research into the inventories of Paston Hall revealed that Sir Robert Paston (1631-1683) had used Paston Hall to store some of his scientific equipment.

If you're a teacher, you might like to look in our Education section and see the materials we've provided there.

The Village in the Letters 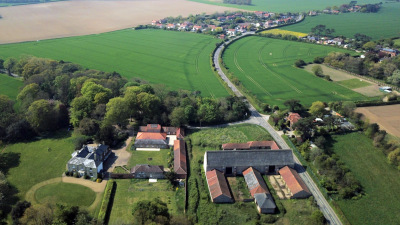 Paston Hall, the Great Barn and today's Paston village.Events in the village are seen in the Letters. When Agnes Paston writes to son Edmund in 1445 we glimpse the parson failing to put his weight behind the plan to change the line of the road, and there are issues over rents and plans for building at Paston Hall. Nearly 200 years later Lady Katherine Paston is writing to her son William at university in Cambridge, looking forward to his returning to the village but passing on the sad news of a village family devastated by the plague.

There are over 1600 letters now in the databases on this site. It's a rich experience for the family or local historian to look up such references. While we've much indexing still to do, there are two powerful search facilities already available. Within the Paston Footprints project it is possible to use the letter search facilities to find references to places and people. Behind the scenes our volunteers have undertaken a substantial task in cross-referencing the many and various spellings of place names and personal names, to enable you to carry out searches. You can also search for places by use of the map search page and by following the instruction there.

When looking at the letters, you'll find there's often a menu that will enable you to view the letter as it might have been written today – medieval language can be tricky to follow! You'll also find at the bottom of the letter page an option that will allow you to see the original letter as it is today, in the British Library. "Recto" is the "right" or "front" side of a page, and verso is the "left" or "reverse" side. 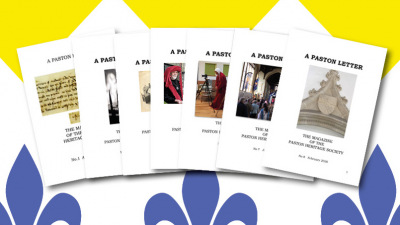 Paston Letters for the 21st centuryOnce the Paston Heritage Society decided to embark on a series of magazines to put some of their recent discoveries into print, there wasn't too much doubt as to what they should be called - and the Footprints project has enabled these publications to continue to come to life.

There's a range of articles about the Pastons, about research on the Pastons and about aspects of the Footprints project. Additionally there's creative writing and poems based on the Paston story.

You can download all the copies if you'd like to catch up. There'll be a final celebratory volume later in 2021 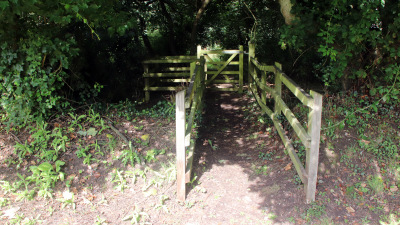 The gateway from Paston Church.For each of the Footprints hubs, we've established a trail and activities – the former for more adventurous walkers, the latter for families to explore more locally. For the area around Paston Church itself, there are several items of interest; there's a certain amount of car parking available at the church.

With the help of Norfolk County Council, these are now well-marked trails; look for the blue markers with the griffin logo. You'll also find a printed map, or you can follow a map available on-line. It may be that you choose to park at Edingthorpe for this walk, as there is a lot more space available there.

If you can't get out and about yourself, you can also follow the walks and listen to the podcasts on-screen from this web site or from the Paston Footprints web site. Enjoy our photographs of the the history – both human history and natural history.

Later in 2021 you'll be able to access a Phone App to act as a guide as you walk and supply a podcast for various locations. There's a web-based version of the Phone App and in due course there will be a version available from the Google App store and the iPhone App store.