In the midst of the 'Wars of the Roses', the main action in East Anglia was at Caister Castle. Could it have been that there was a growing allegiance to the Lancastrian Earl of Oxford by the Paston brothers that influenced an attack by the Duke of Norfolk, or was it just a local opportunity for him? 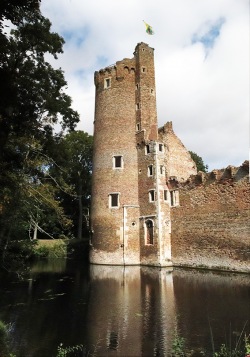 The imposing tower of Caister CastleLate August 1469 and the Duke of Norfolk, covered by the civil unrest around the rest of the country, decided he could fulfil his covetous wishes and seize Caister Castle. Since the death of its owner and builder, the veritable Sir John Fastolf, its ownership has been in dispute. John Paston I, lawyer and counsellor to Sir John Fastolf, had claimed the building through a will of Fastolf's which had been dictated to him shortly before Sir John's death - but there were no actual witnesses. A number of people who had expected to benefit from Fastolf's will had not received anything.

The King's law was not holding around the country - indeed, the very office of King continued in dispute. The Earl of Warwick's forces had just defeated Edward IV's army at Edgecote Moor, and Edward was a prisoner. In the west country, in the north and in East Anglia, local lords warred against each other. The luxurious and well-defended castle at Caister would be a great asset, and the Duke of Norfolk, who already had a castle at Framlingham, wanted it.

Greatest of the fortified mansions

The first of the Paston Letters we have implying the Duke was actually making a military move is that of 10th April 1469. Many earlier letters illustrate the tensions and fears of the Pastons, including attacks on lesser defended manor houses at Hellesdon and Drayton, but this time it was Caister itself, the greatest of the fortified mansions.

Firing a medieval hand gun21st August, and the Duke had moved on the castle with hundreds of men. A notebook of William Worcester, formerly John Fastolf's clerk, says that it was three thousand men, but we probably have to allow for quite a lot exaggeration. Historians think three hundred seems more likely. Details are not always clear, because bits of news reached Margaret Paston, at her mother's house in Norwich, and other news was reaching her elder son John Paston II in London. At Caister, leading the defenders, was John Paston III. (Remember that John Paston II and John Paston III are brothers.)

Three days into the siege, and William Worcester reported in one of his notebooks that guns were being fired at the castle. We know that both sides had guns, and another of the Paston Letters reports that the Duke is trying to get some more guns brought from King's Lynn. Cannon had begun to be used early in the century, and there was a simple, if rather inaccurate, type of gun that could be used by individual soldiers. We know from a later letter by John Paston III that two of the Duke's men were killed by guns fired from the castle. If we read the list of things left in November 1459 when Fastolf died, there were about twenty guns of various types at the castle.

Margaret Paston wrote to her eldest son John II, telling him he should do more to assist his brother. John II was in London, trying to get some support and arrange legal action. John III was at Caister, leading the men who were attempting to hold the castle. John Pamping and John Daubeney, faithful servants of the Pastons, were there and Margaret's cousin Osbert Berney was helping. Another servant, Thomas Stumps, was prepared to serve. He is thought to have had no hands but said he could still fire a crossbow. A letter from John Paston II to John Paston III says that one practical thing that John II in London had managed to do a few months earlier was to hire four professional soldiers, who proved to be very effective, even though one of them had a reputation for being "cupshotten" - in other words, he liked his beer too much!

In total about thirty men, some who knew about this sort of fighting and some who were local peasants who had been brought in to help, were facing the Duke's small army. They were serious in their intent: one letter records that they had broken three or four steel crossbows as they practised before the siege started.

A medieval field cannon of the type probably used at CaisterThe Duke's men took up positions on three sides of the castle. The Duke probably didn't want to batter a castle which he hoped one day to own; a siege which stopped food and other supplies reaching the people in the castle would be the best way of achieving what he wanted. There were lots of threats, and envoys carried messages about what he would offer if John Paston and the defenders surrendered the castle - but that would mean the Pastons would be left with very little. The Duke wouldn't allow messages in and out of the besieged castle itself but did write to Margaret in Norwich; in London John II searched for support to help his case. There are letters from John II to Walter Writtle, where he is asking Writtle to use his influence with the Duke of Clarence to help; Writtle went to Yarmouth to meet with the Duke of Norfolk, but to no avail.

At the castle, tragedy unfolded. We have mentioned that two of the Duke's men were killed by gunfire, and on the other side the Paston's faithful servant John Daubeney was killed by a bolt fired from a crossbow, and Osbert Berney was badly hurt. Others were severely injured - Margaret Paston to John Paston - and gunpowder, arrows and food were running short. John Paston II replied to Margaret on 15th September, saying that not long before Daubeney and Berney had been fine, but he was misinformed, as Daubeney had indeed been killed, on 9th September.

John II wrote to his brother John III on Monday 18th September, hoping that somehow a letter would reach him. He explained that he thought he was making progress with some negotiations. Nevertheless, John Paston III and the defenders realised they couldn't hold out much longer.

The Duke of Norfolk drew up a document to cover the terms on which he would accept surrender. John and his men would be allowed to leave the castle and would not be further attacked. John had had one ally in the Duke's camp - the Duke's wife. John Paston III had been in service to the Duke of Norfolk earlier in the decade, and had evidently struck up some friendships. He wrote to his brother to explain what had happened - and said how well the four professional soldiers had conducted themselves.

With the surrender of the castle, the fortunes of the Paston family were at a low ebb: nearly ten years after the death of their benefactor Sir John Fastolf they had lost a prize possession, and it would be a further ten years, after the death of the Duke of Norfolk, before they could recover it, this time through a legal process.