Understanding the Paston house at Oxnead is problematic, because of changes over the centuries. William PastonI lived in the village of Paston and had his hall there; in the process of purchasing manors and establishing his position amongst the landed gentry, he bought Oxnead from William Clopton of Long Melford in 1419. He settled the property in jointure on his wife Agnes whom he married the following year.

It is not possible to say much about the manor house at the time of this purchase because of the lack of evidence. Earlier thinking based on 19th century maps was that it was on a moated site; these are now interpreted as water gardens for the hall and that the original house was nearer the church and is now hidden under the later building.

It is generally thought to have been a moated building, to the south-east of the present house. Just as in the village of Paston, William arranged for the rerouting of a road to suit his plans. We can only surmise that William might have undertaken some improvements to that building and we know that Agnes lived there for a while. Her grand-daughter in law Margery was there for a short while in 1477, her husband John Paston III having made a message to the Oxnead tenants one of his first actions after gaining accession after his elder brother's death.

The licence for the rerouting of the Oxnead road was obtained by William in 1443. It is reasonable to suggest that the 135 perches of the road - 679 metres - given in the licence is the road from the bridge across the river Bure to the east, going north and then turning right to the entrance to today's hall. 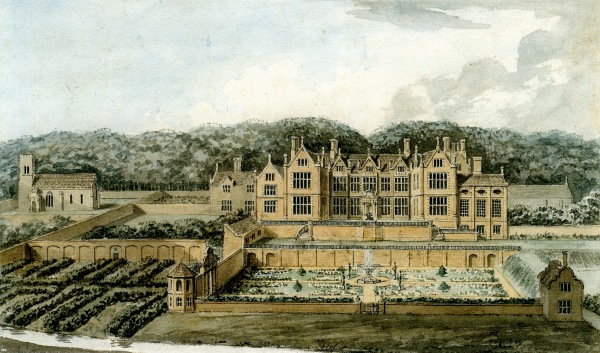 A study by John Adey Repton from 1809. Given that the hall had been demolished several decades earlier, it has to be regarded as somewhat speculative.

The manor and house stayed in the Paston family for a further century, but by 1575 the papers of Nathaniel Bacon tell us that Clement Paston had built himself a new hall, on terracing leading down to the river. Bacon supplies us with some details of the building, indicating that its bricks were made on site. An E shaped building, typical of the Tudor period, the hall incorporated some elements from another Paston property, the castle at Caister. An armorial lintel, today found as part of a chimney piece at Blickling Hall, was once part of a window at Caister castle and arrived at Blickling Hall via Oxnead Hall.

Clement Paston lies in the village church at Oxnead. His memorial bears witness to his achievements as a seaman and a soldier in the reigns of four monarchs, before he retired back to Norfolk and served as a Justice of the Peace. The income he had amassed would build the hall. 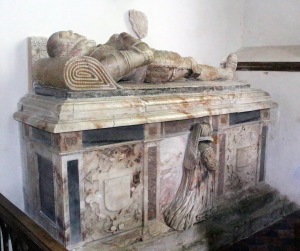 The tomb of Clement and his wife Alice in Oxnead church

It became a principal home of the Paston family, although Sir William Paston (1528-1610), lived in the main at Paston Hall. He had inherited Oxnead from his uncle Clement in 1597, but only lived there for a short while. In due course another William (1610-1662) and his wife Katherine made Oxnead their home. It was they who enriched the hall as a treasure house. They employed the renowned sculptor Nicholas Stone and agent and created one of the greatest of the 17th century collections of chimney-pieces, statues, busts, furniture, paintings and objects-d'art. After Katherine's death in childbirth in 1637, William went on the Grand Tour across Europe, again collecting as he went.

After a spell in Rotterdam, an exile during the English Civil War, he paid a substantial fine and was able to return to Oxnead and take up county duties. It is in this period we have a glimpse of the great activity at the hall through the accounts of 1654-1656, kept carefully by steward Bernard Dickinson. 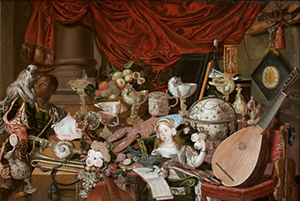 The fortunes of the family had turned with the fine William had to pay, and Caister castle was sold. Son Robert was a convinced Royalist, mortgaged properties, spent on enterprises in Great Yarmouth as 1st Earl of Yarmouth and entertained Charles II at Oxnead. An inventory of Oxnead in October of 1687 indicates nearly 80 rooms and a huge collection of paintings and statues. The great painting The Paston Treasure dates from this period, a "painting that speaks specifically on the family's history". He continued to improve the hall, thanks partly to a grant from the king in 1666, with the reconfiguration of the hall to include a chapel and a new servant’s hall. This was the last major building phase of the Pastons at Oxnead.

The debts mounted and Robert's son William, the second Earl of Yarmouth, descended deeper into arrears and Oxnead was sold. His three sons predeceased him; the death at sea of son Captain Robert Paston ended the male line of the Pastons.

With the death of Robert Paston, 2nd Earl of Yarmouth, in 1732, the main hall at Oxnead soon fell into disrepair. By 1744 it was said to be 'in utter ruins'. The estate, as with most of the Paston properties across the county of Norfolk, was sold in 1757 to Admiral George Anson. Everything at Oxnead was pulled down except for the west wing, which Anson turned into a farm house.

In the interim, in 1735, the Norfolk historian Francis Blomefield had the initiative and good fortune to be able to gain access to the site; there he discovered the collection of documents we now call the Paston Letters.

There was further good fortune in that John Adey Repton took an interest in the house. Son of the landscape designer Humphry Repton, he had studied to become an architect. His uncle, another John Repton , lived in the former west wing and John Adey began to investigate the hall, possibly with a view to it being reconstructed. Several studies are attributed to him. He states that he is working from the evidence from the foundations, collected at some time before 1809. He also gathered recollections from older local residents and subtle changes in his drawings indicate the incorporation of new evidence. The Repton pictures are the most reliable evidence we have of what the house one looked like - though they are almost completely speculative. 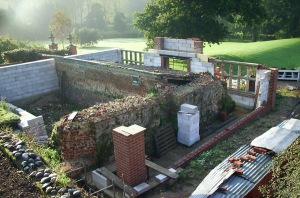 Into the 1990s and 2000s the then owner took it upon himself to replicate some of the Tudor features; thus the facade of an extension and an imitation of the King's College chapel building can be seen today. Perhaps calling the Elizabethan building an example of "façadism" can carry through to a slightly different meaning of the word in the 21st century. 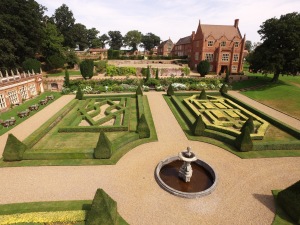 The splendid southern terraces of Oxnead Hall in August 2018.

Today the west wing is in regular use as a splendid wedding venue and the gardens are beautifully tended in the layout as envisaged from those earlier times. Gravel tracks mark the lines of the foundations of the main hall and the terracing down to the river is as appealing as ever. While the property is in private hands, a walk along the public path on the other side of the river, especially on a sunny summer's day, gives the chance to see what brought Clement and his immediate successors to build there.