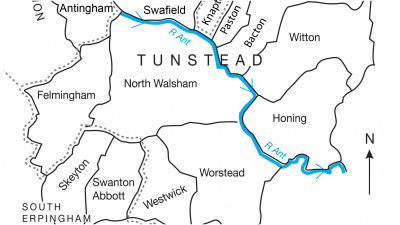 The Hundred of Tunstead, with North Walsham central to 12 other parishes.The parish of Paston, the original home of the Paston family, is a long, thin parish, bordering at the south end the market town of North Walsham. Across the county of Norfolk there is a market town about every ten miles or so, essential to the commerce of the county – itself one of the most densely populated areas of England in early medieval times. North Walsham is central to a ring of 12 parishes, including Paston, and we can imagine a steady flow of traders and their produce into the town and out of the town, especially on market days. Thursday remains market day in the town. The market was formally chartered in the year 1274, but this was doubtless recognition of a reality of existing commerce.

We have glimpses in documents of an earlier Clement Paston and son William Paston, but it is with Clement (1355-1419) that we generally begin our story. 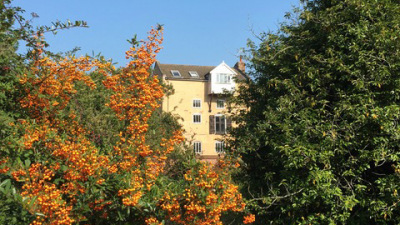 Bacton Wood Mill, mentioned in a document of 1347, photographed in 2020.Clement Paston of the late 14th century had been expanding his landholdings. Paston bordered the River Ant (now the North Walsham and Dilham Canal) at North Walsham. The nearby Bacton Wood Mill (pictured in 2020) had become an important asset for the Pastons, as had the use of the river pasture, some of which was common land.

The Peasants' Revolt of 1381 brought the more powerful members of the local communities into dispute with the Abbot of St Benet. (The Abbey is near Ludham and the ruins can be visited.) On 20 June 1381 at North Walsham, Clement Paston and Roger Leech were accused of seizing goods belonging to the Abbot of St Benet including timber and wool as well as court rolls, feodaries and rentals which they took and carried away. They also assaulted the abbot's servants , injuring them so that the abbot lost their service for a month. (TNA,KB 27/483m.27d) (From Monastic Life in Medieval British Isles ed. Stober, Kerr, Jamroziak.)

The account of his later dispute in 1413 with the abbot is one of the records that gives us a clue to the continued tensions in the locality.

In the Paston Letters 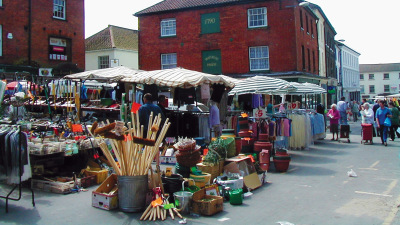 Formally chartered in the 13th century, North Walsham market continues to thrive in the 21st century.Naturally the names of many of the places important to the Pastons occur in the hundreds of letters. Their ownership of land, the collection of rents, the oversight of misdemeanours are all there in their records. In A letter from Judge William Paston to a lord we can't identify, he makes it clear that he believes he holds the undisputed rights to Baxter's manor near North Walsham (probably the area known as Bryant's Heath to the west of the town). After William's death, in about 1451 Agnes Paston is writing to her son John about a land dispute at North Walsham, where Agnes had taken hay claimed by someone else. From the later letters, one of Lady Katherine's letters gives a dramatic picture of the plague in the locality in 1626.

Within the Paston Footprints project it is possible to use the letter search facilities to find references to places and people. Behind the scenes our volunteers have undertaken a substantial task in cross-referencing the many and various spellings of place names, to enable you to carry out searches. You can also search for places by use of the map search page.

Throughout the four years of the Footprints project there has been a series of events at North Walsham, from a major orchestral concert in the parish church through to the ongoing association with the developments in the Heritage Action Zone project. We've been able to identify sites for information boards and are working with local designers Rocket Design for these to be produced.

We've undertaken detailed photography of Sir William Paston's (1528-1610) tomb to enable the building of a 3D image – the few weeks when the coloured glass of the east end was away for restoration proved an ideal time for photography in white light. The many coats of arms at the top of the tomb are proving a source of information for our educational units on heraldry – you can draw your own coat of arms on one of the pages on this site.

One of our most recent enterprises has been the drone photography of St Nicholas Church as part of developing an information page for this web site and the Paston phone app. It was a 6am start and hopefully didn't disturb anyone in the area around the churchyard; the result is a highly detailed computer-based model of the church, which is enabling us to show it as it is thought it looked when first built – with its 147-foot tower intact. 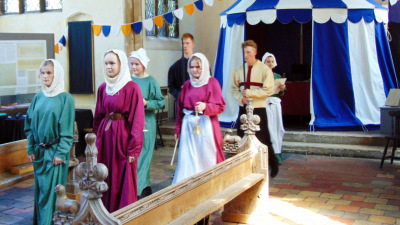 Paston College students perform the family story at Hungate.We've mentioned Sir William Paston (1528-1610) already – we have to keep using his dates to distinguish him, there being ten William Pastons in the main part of the family story. His importance in North Walsham's history cannot be overstated. While he lived most of his life at Paston Hall, to the north, and perhaps latterly at Oxnead Hall, near Aylsham, North Walsham was a focus of his attention.

After the great fire of 1600, he stepped forward with a donation to everyone in the town who had suffered loss, but also took the opportunity to purchase two acres of land to the south of the market place to found his school. If you are a former pupil from the grammar school years, you will have the date of 1606 'firmly fixed' as its foundation; in fact we think the school was established from 1604, but its endowment document dates from after those first couple of years. From 1606 to 1982, through various ups and downs, it operated as a boys' school, then for 35 years as an independent Sixth Form College. From the end of 2017 City College Norwich has provided the educational service on a much expanded site, but the original two acres remain in the care of the Paston Foundation. Among the Footprints events have been dramatic presentations drawn from the Paston Letters by students of the College. And of course Sir William has to appear as one of our animated Pastons for the younger generation on this web site. 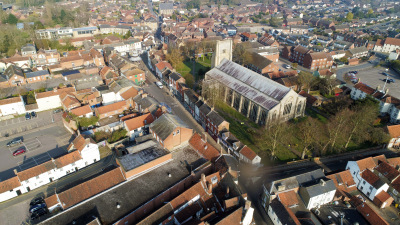 The town centre in May 2021, from a drone photograph.Our North Walsham stroll is somewhat shorter than a number of the other Footprints walks, being within the town. For a longer walk, the Paston Way, a Norfolk County Council walk, begins in North Walsham, but that's 22 miles in total – so you might wish to split it over two or three occasions. Both the Footprints Paston Walk and the Bacton Walk include parts of the longer Paston Way. You will find more about these two walks at Paston Footprints.

The parish church of St Nicholas offers a journey of exploration in iteself, and we'll be adding a page here that will give you some of the plaques, memorials and artefacts to be found in the church.