Owning a Manor - A Paston Ambition

As the Pastons emerged from being tillers of the land in the village of Paston, their aim was to move up in society. The commitment of his father Clement to the education of his son William and the financial aid of his uncle lawyer Geoffrey Somerton enabled William I (1378-1444) to raise his sights. To overcome the accounts that said he was merely a bondsman, virtually the property of another landowner, he need to own a manor of his own - he needed to be known as Lord of the Manor.

What was a Manor? 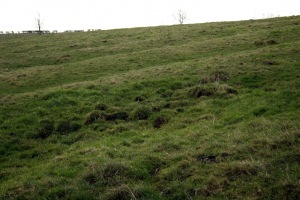 Much of a manor would be made up of land using the open-field system for strip farming. Evidence of this can still be found; here at Little Barugh in North Yorkshire.A manor was the basic economic unit of medieval times across the whole of Europe much of western Europe. It would be based on an area of land, originally given by the monarch, and with it came the tied to it were unfree serfs (villeins) who were essentially owned by the lord of the manor and the free peasants who had a higher status than the serfs and worked areas of the land - though paying rent to the lord.

The lord of the manor would generally have a manor house, in which he lived and from which he and his stewards undertook the management of the manor. There was also a manor court, at which legal matters and disputes could be decided.

As parishes developed, the forerunners of our parishes today, the name of a manor might become the names of the parish but in the course of time the parish might contain several manors. And manors could grow and shrink, depending on events.

The Lord of the Manor 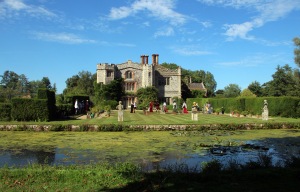 The moated manor house at Mannington, home of the Lumnors, friends of the Pastons.Thus the Lord of the Manor both owned land and activities that took place in the manor, he or she owned people who owed various duties to him or her. This proprietorship over people went back through many centuries and to move from one class of person to another was extremely difficult. Some claimed that Clement Paston was a bondsman, who had to give due service to the lord of a manor in the Paston parish; the Pastons claimed that they were freemen but the best way out of the argument would be lords of the manor in their own right.

One way to do this was to buy a manor - but this was expensive, though William Paston became rich enough to do this. Another way was to marry someone who would inherit manors - and William and his eldest son John did this through their marriages. There were other legal ways of doing it - perhaps by accepting a manor in lieu of the expensive charges a lawyer might make for his service.

Perhaps the most controversial means by which the Pastons gained manors was when John Paston I inherited the Norfolk lands of the rich knight Sir John Fastolf. A few days before his death Sir John Fastolf allegedly gave his lands to John Paston I by means of a nuncupative (an oral, not written) will - and for ten years afterwards there were many arguments about what he had actually said and intended. It even led led to the attack on Caister castle.

The Pastons and their Manors 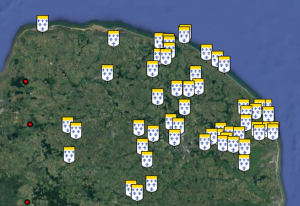 Click the link in the text for the interactive mapUsing the evidence available, mainly from the account of Norfolk history by Francis Blomefield, we've attempted to show something of the rise and fall of the Pastons as manor owners across Norfolk over the years. As with much research in history, there are gaps and there is much more research that can be done, but we think there's sufficient data to give some understanding of the waxing and waning of Paston fortunes.You can go to Interactive Map of the Paston Manors to gain a general picture of events by using the slider through the years.

Please remember the factors to take into account when using the interactive map. Firstly, the manors we have used are only those found in documents listed on the The National Archives web site. In general these are only the manors for which manorial records have survived There were many other manors for Norfolk which are not included in that list. Secondly, whilst we have tried put the locations within the correct parishes, that is the limit of the accuracy - it is not generally possible to identify manor boundaries and there will be several manors within each parish. Thirdly, we are primarily dependent on the accuracy of the research of Francis Blomefield and his colleagues.

Our first sub-heading on this page is 'What was a Manor?'. We could perhaps have said 'What is a manor?' We still have manor houses and you may still have the title 'Lord of the Manor' - but since 1925, in England and Wales, the land and the title no longer have any legal status, following the passing of the Law of Property Act, 1922.

We'll conclude this page by saying that if you have specialist knowledge about what's written here or are eager to pursue research on Norfolk manors, the Paston Footprints project will be delighted to here from you!