The city of Norwich was one of the largest in the kingdom in medieval times. The Pastons were owners of houses in Norwich, mixed with the business people of the town. We'll start with a reconstruction of the city in late medieval times.

The city was placed in a naturally advantageous spot, with the River Wensum acting as an extension of its walls. However, the river was not the clean and pleasant watercourse that it is today. In summer especially its flow was interrupted by whatever rubbish was thrown into it by traders and people in general. Nevertheless it was a reliable if not always healthy water source, and the walls and gates were secure. 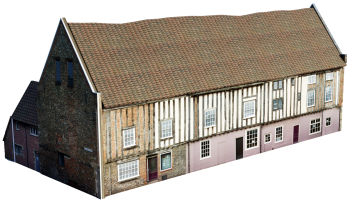 The Pastons used the city for trading. They had premises on Conesford Street – now King Street – the main north-south route through the city. And they were close friends with Robert Toppes, who owned Dragon Hall, now restored, which was then a great trading centre. The first William and John Paston were members of the Guild of St George, with which the hall is closely associated.

Close by was what is now the oldest house in Norwich – the Music House, part of Wensum Lodge education complex. It was most famously owned by Jurnet, a wealthy Jew, and part of its undercroft is still known as Jurnet's Club.

The house was bought by John Paston in 1488 and extended. Sir William Paston is believed to have installed the saloon with Jacobean windows in the very early 17th century. They still remain, but the family sold the house in 1613 to Sir Edward Coke, Recorder of Norwich and Lord Chief Justice. He build an extension and called it Paston House in memory of his first wife, Bridget Paston, who died in 1598.

This is very close to the spot where Lady Julian, the world-famous author of Revelations of Divine Love, was an anchorite. Although she does not seem to be mentioned by the Pastons, they must have been aware of her. She died some time after 1416. 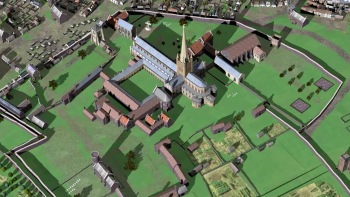 The first William Paston was buried in the lady chapel of the chancel of the cathedral; the chapel was later knocked down

Conesford Street continues into the religious centre of the city, wheren Tombland stretches in front of the Cathedral. The first William Paston was buried in the Lady Chapel there, which was destroyed during the reign of Queen Elizabeth I by Dean Gardiner. The ruins can still be seen at the back of the Cathedral. William may have been educated at Norwich Cathedral School, which was founded in 1096.

At the north end of Tombland stands the Maids Head hotel, which was founded about the same time. Part of its 15C structure remains: its Wine Press Restaurant is situated in the courtyard of the 15th century inn.

This is just round the corner from Elm Hill, where the Pastons had at least one house. The site is halfway up on the right and is marked with a blue plaque. The original house burned down in the great fire of 1507, and the one visible today – owned by the Strangers' Club – was built shortly after that.

At the top of the hill is the Britons Arms, now a coffee house but in the time of the Pastons housing lay sisters and probably attached to the church next door, on the corner of Princes Street, which was the Pastons' parish church. This is St Peter Hungate – still very much a presence. This is because the Pastons, together with their neighbours the Inghams, paid for extensive repairs in the 15th century. As well as their house on Elm Hill, it is believed the Pastons also had a house on Princes Street at one time.

West of this is the massive complex now known as The Halls, consisting of St Andrew's Hall and Blackfriars Hall. These were originally one friary created by the Dominicans after the Sack Friars were ejected from the area in 1274. The buildings created by the Dominicans were destroyed by fire in 1413. The complex was rebuilt and completed in 1470, with some help from the Pastons, who paid for the roof. Sir John Paston and his wife Margaret have their coat of arms on the original oak door of St Andrew's Hall.

Frequented by the Pastons 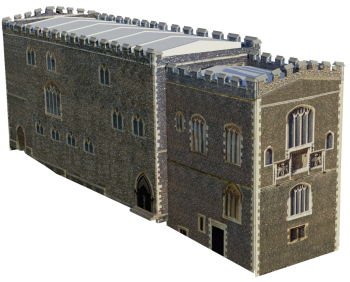 Norwich Guildhall in 1500, the centre of civil administration in the city

Other landmarks in medieval Norwich were the market, which has existed on the same site for 900 years, and next to it the Guildhall, built in the early 15th century and undoubtedly frequented by the Pastons – from the Good Judge, William, onwards. Of course the Norman castle looked down on all this. It is now a museum, home to the famous painting, The Paston Treasure.

Behind the Cathedral to the north was the Whitefriars Priory complex, now almost totally engulfed by modern buildings. There is a small arch near Whitefriars Bridge and another one transplanted to the Magistrates' Court nearby. Opposite what used to be the graveyard where Agnes Paston and her son were buried was one of the houses of John Fastolf, the Pastons' friend and benefactor. This too was destroyed in the 1930s to make way for a factory, but pictures of it still exist.

Outside the city centre are other sites owned by or important to the Pastons. St Leonard's Priory stood on the hill on what is now known as Kett's Heights, and further east is Thorpe Old Hall, a later Paston property. Further afield to the north are Hellesdon and Drayton, where the family received serious setbacks discussed in the Letters.