In July 2019, the Paston Footprints project carried out sampling at Oxnead Hall, under the guidance of the then Project Manager Matt Champion, who contributes this report. It was part of a dendrochronology survey, with the aim of establishing a firm date for the buildings that are still standing - in particular the enigmatic north range.

Tradition states that it was built by the noted soldier and sailor Clement Paston in the period 1569-1585, as part of the wider rebuilding of Oxnead. Most of the house that he built has long since gone, being demolished in the early eighteenth century. All that is left are parts of what was once the east range, and the north range - which tradition again states was built as a stable block. 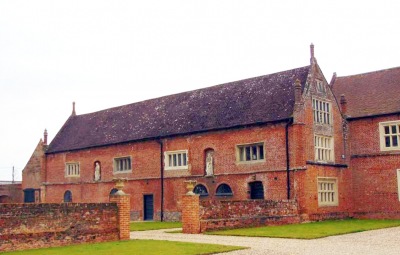 However, the north range is a little odd, and the bricks used to build most of it don't match any others in the other surviving parts of the building. They look earlier. Whereas the bricks used in the east range match with those used to build the barns, and extend the church - both of which belong to the late sixteenth century. It was all a bit of a conundrum. Then there was the question of the dormer windows, show in one early sketch to be on the west side of the roof. Was there any actual evidence for these, or evidence to support the idea that the roof space was once two storey servants’ accommodation?

We called in timber expert Ian Tyers, and a team directed by Matthew Champion, to see if we could get an exact date for the roof structure of the north range. And we did. Sort of. The timbers did not yield an exact year, but we came back with a date range in the early 1570s. So exactly what we'd expect if this was part of the Clement Paston rebuilding.

However, nothing is ever quite that simple in buildings archaeology.

Evidence from the Timbers

A brief survey of the standing timbers showed that there was clear evidence that dormer windows had once been present on the west face of the roof, and the pegs to hold them in place were still firmly in situ. They weren't like any dormer windows you'll come across at most other sites though. These were dummy windows - frames that were pegged to the existing rafters but were never designed to be anything more than a facade. They probably never had any glass in them, and certainly couldn't be used as windows. And then there was the tradition that the loft space had been divided into two storeys, and used as living accommodation for the servants. 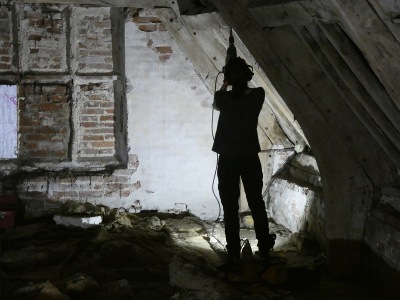 Taking a core of wood to date a timber

The roof structure is pretty much intact, as it was when first built, and there certainly wasn't any evidence for an inserted floor or partitions. It was also incredibly clean, with none of the soot, markings, or graffiti that we have come to associate with living spaces of this period. In fact, it looked as if nobody ever really ventured up into these spaces, and certainly didn't live up there.

So were at least some of the traditions true? Did we actually have the loft spaces for an Elizabethan stables, made to look like part of Clement Paston's larger and grander house, with false dormer windows and the impression of being a living space? Possibly, or possibly not.

The roof structure was certainly from the 1570s, and was in a quite remarkable state of preservation, although there had been a few minor replacements here and there. What was clear is that the timbers were sitting on top of their original wall plate, which was tied into the brickwork below. It was the brickwork however that was the problem. Viewing the range from outside it was clear that there was a break in the building fabric, sitting just above the line of the second storey windows. It can be seen on both the front and rear of the range. It was undoubtedly of two building phases. Exactly how far apart those building phases were is impossible to say at the moment. It could be a year, a decade, or even five decades. We simply don't know. What we do know however, is that our 1570s roof timbers are tied into the bricks of the upper building phase, which means the lower building phase must be earlier. We weren't looking at just one building, but most probably two.

The Source of the Timber?

The survey had one last surprise to throw at us though. Whilst hunting around the yard outside, amidst the piles of salvaged brick and tile, we came across some other old timbers. They were clearly ancient, and belonged to part of a roof structure, but nobody was quite sure where they had originally come from. They also looked to be in very poor condition, but the best of them was chosen, and a sample taken. A sample that produced a rather surprising result. The timber had been felled in the middle decades of the fourteenth century - two hundred years before Clement Paston began his great rebuilding at Oxnead.

Brick and tile found in the yard

The problem, as you will undoubtedly have spotted, is that whilst we had a solid date for the timber, we had no idea exactly where it had come from. The church was certainly one possibility, which has a fifteenth century roof to the nave, but a completely rebuilt roof to the chancel. Another possibility is that the timber had somehow been imported to the site, and didn't come from Oxnead at all. Less likely on the face of it, but it had to be considered. The last possibility is that the timber had come from an earlier building on the site; the early manor that had been bought by the Paston family from the Clopton family in the early fifteenth century. If this was the case, and given the date of the timber, it might be that we weren't looking for a Paston house at all, but rather a Clopton manor.

Oxnead clearly still has some secrets to tell.