One of the best ways to understand Middle English is to read it out aloud. This will help you become familiar with the metrical and rhyming patterns, but also with recognising the vocabulary.

Read the letters out loud

Spellings have changed over the centuries, there are also some key differences in pronunciation:

All consonants are pronounced:

The ‘Basics’ of Middle English

There are a few general patterns about how nouns, verbs and pronouns are formed. This section is a prelude to reading the comprehensive guide to Middle English language in the core text. Please remember these are general guidelines and one of the key characteristics of Middle English is the variation that exists, so that each text needs to be studied as a separate entity.

What was disappearing in the language by this time?

What are some of the main features of Middle English?

Strong verbs form their past tense by changing their stem vowel, as in Modern English.

To complicate things, we also have to remember that abbreviations regularly appear in the Paston letters, so ‘me’ might not be a pronoun, but a contraction of ‘men’, for instance, as in this letter: “causeth me to set the lesse be us”. Me more often refers to men or they, than the first person singular use we are so used today. 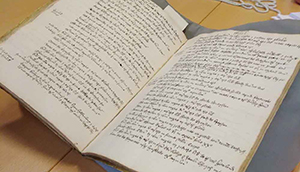 Norfolk Dialect found in the letters

Reading, or interpreting, and writing out the letters on the page is, however, only the first step. The opening of Margery Brews’ Valentine letter, for instance, transcribes as:

If you want to develop specialized skills in medieval hands, visit here https://faculty.franklin.uga.edu/ctcamp/paleography
However, medieval transcription skills are not a requisite for taking part in the Paston Footprints project! A number of editors have got there before you for the medieval letters, so it is the next two stages where we are looking for volunteers.

This stage is what it says, the updating of spelling and punctuation.

Right reverend and worshipful and my right well-beloved Valentine, I recommend me unto you, full heartily desiring to hear of your welfare, which I beseech Almighty God to preserve unto his pleasure and your heart’s desire.

Writing for a modern reader. This is a subjective process. In this one example, for instance, is ‘respected’ a good replacement for ‘reverend’? ‘Honourable’ for ‘worshipful’? God’s ‘will’ for his ‘pleasure’?

Most respected and honourable and my most dearly-beloved Valentine, I commend myself to you with all my heart, desiring to hear of your happiness, which I pray Almighty God to preserve according to His will and your heart’s desire.

What can help greatly in these judgement calls, is using Middle English Dictionary. You will find that words have, often, a large range of meanings, and working out the nuances of which to select is often gleaned from the context of the letter.

Of course, you could use even more poetic licence, and render a 21st century reading, such as:

I rate you, you’re straight down the line and I love you so much, my Valentine sweety. You’ve got my heart, totally. I’m desperate to hear if you’re happy. Oh God, I hope you stay okay and your heart bursts too.

But some may object to such a loose translation, arguing that’s more of a transfiguration! Interested in giving it a go? You can read the transcriptions of various editors curated on this site and attempt modernizations and translations. All volunteers welcome. Please sign up here to volunteer